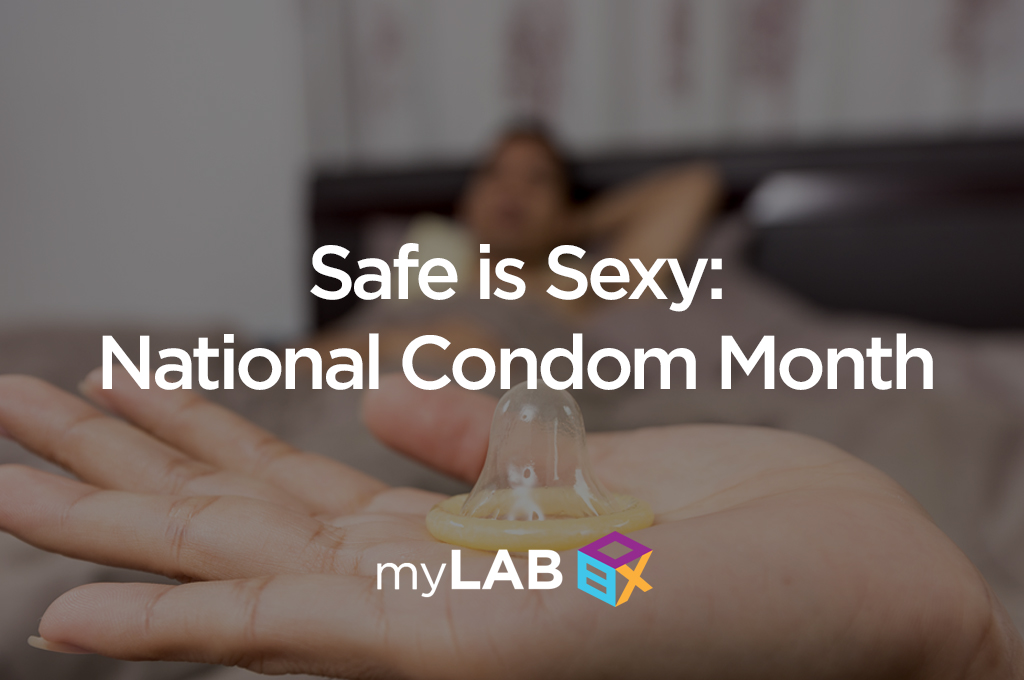 At myLAB Box, we believe that safe is sexy. That’s why we’re pleased to celebrate National Condom Month. In the United States, this day of awareness originally began in schools and on college campuses. Since then, it has grown from one week into a month-long educational extravaganza.

Safe is Sexy for Condom Lovers

All February long, National Condom Month organizes themed awareness “holidays.” For example, Valentine’s Day is also National Condom Day. Because of all the awareness about love and dating on February 14th, this is a great opportunity to spread the word about safe sex. It’s important to remind people about the possibility of spreading of sexually transmitted infections and diseases.

This week, we’re also celebrating National Condom Week. This takes place between February 14th and 21st. This extended period of awareness aims to educate all of us about the risks of unprotected sex.

When it comes to sex, safe is sexy. Condoms are a critical part of keeping yourself safe between the sheets. However, they work best as one part of a fully safe lifestyle.

It’s important to keep in mind that condoms are not foolproof. While they will certainly decrease your risk of catching an STI, they don’t keep you totally safe. Condoms sometimes break. In addition, they cannot cover the entire skin area that may become infected. It is important that you use them, but also that you get tested in order to avoid future damage to your health.

Here’s one key fact that people often forget: oral sex is still sex. Going down on an infected partner can transfer certain STIs, such as chlamydia or gonorrhea,  directly to your mouth and throat area. Even during oral sex, it always pays to take precautions, such as using condoms and dental dams. Practicing safe sex is always a smart idea.

Of course, the only way to know if you are infected with an oral STI is to screen for them. Genital-only testing will miss an infection in the throat or rectum. That’s where extragenital testing comes in!

At myLAB Box, we offer extragenital testing to specifically diagnose infections of chlamydia and gonorrhea that affect the mouth, throat and rectal regions. If you’ve been performing oral sex, routine extragenital testing is your best plan for maintaining total control of your sexual health.

The sooner you know your status, the sooner you can stop the spread of the infection. After a few quick steps, you’ll see that the idea of ” chlamydia in throat ” really isn’t that scary at all.

As you can see, pairing condoms with regular STI screenings is the best way to stop the spread of infection.

All month long, join us in spreading awareness of National Condom Month. Let’s help the entire country to stay safe from sexual transmitted diseases and infections. After all, safe is sexy 12 months a year!